Your Whole Life in an App – the Wechat Phenomenon

Your Whole Life in an App – the Wechat Phenomenon

Communication — Shopping — Entertainment — Business, all on one single platform. It sounds like science fiction. Is something like this even feasible? Facebook is betting on it and is doing everything it can to move in this direction. In China, however, the super-app WeChat is already proving that it can work. Whether this concept could work outside of China depends not on the least on handling users’ data responsibly. Here we will attempt to highlight current developments regarding Facebook & WeChat.

At this year’s Facebook F8 conference, Mark Zuckerberg and his team spoke about first steps toward centralizing their digital communications platform: The Facebook Messenger is planned to integrate content from Facebook, Instagram, and WhatsApp. This announcement signals a slight change of course in Facebook’s relationships with its subsidiaries. Originally, when Instagram and WhatsApp were acquired by Facebook, they had planned to keep the programs independent of one another.

Another topic of the F8: Cashless payments via WhatsApp. By linking a service like PayPal directly with the messenger app, you could theoretically pay directly through an analog-digital interface. This could work, for example, by scanning a QR code with your smartphone to interact with merchants.

CHINA – THE PIONEER OF DIGITALIZATION

Zuckerberg’s speech is conscious of the western economy. This would not have been a necessary distinction before the millennium. You could have simply mentioned “the economy” and it would have been clear that you were referring to the West.

Today, this is not the case. In the East, we are witnessing the rise of new world power. “Feng Shui” — “Made in China” — “Huawei” — little by little, China is conquering western markets and is fighting for a place in consumers’ minds. You may have even noticed a growing fear of being overtaken by China. The current restrictions and “trade war” negotiations between the USA and China are heading in this direction.

Indeed, in terms of digitalization, the fear of falling behind is not entirely unfounded. It may be hard to believe in the West, but anyone who has been to China knows how innovative it is. Have you ever been to China?

If not, no worries. Because when it comes to digitalization, there’s only one name you need to know. This name is WeChat. For those who haven’t heard of it: WeChat is, quite simply, the Chinese version of WhatsApp, complete with a user-friendly interface and a green icon.

With 1.1 million active accounts, WeChat isn’t only the third most used app in the world after WhatsApp and FB Messenger; demographic data shows its use in China is especially high — almost everyone there has WeChat. Outside of China, its use is rather sparse, but this is changing. More and more you can find the app on smartphones of people who want to build a connection with Chinese businesses or want to position their brand in the Far East.

On the one hand, WeChat is completely unrivaled in China. Facebook, Google, Instagram, and WhatsApp are all blocked by the “golden shield”, the famous super firewall in the People’s Republic of China. So, for the Chinese, there are no real alternatives. On the other hand, WeChat is very practical to use. In addition to its prominent messaging feature, the Chinese app can do a lot more.

WeChat vs. WhatsApp – Messaging
First, there is instant messaging. There is not much to say about this, except: Its simplicity and user-friendliness is similar to that of its western counterpart, WhatsApp — so it is in no way inferior.

Some minor differences: In WeChat, messages can be deleted up to two minutes after sending. If you accidentally send a message to your boss instead of your partner, you can correct your mistake. Also, there are no check marks like in WhatsApp. The user is informed if the message could not be delivered, but other than that there are no indicators.

WeChat vs. Paypal – Payment
WeChat is not only a messenger app — it has a wide range of other features. One of those features is the digital payment. This is far from a small bonus-feature: WeChat Pay was able to quickly prove itself after it launched. In 2016, the app already had over 300 million users. In Chinese cities, WeChat is in the process of completely replacing tried-and-true cash payments.

A cashless society is often considered a vision for the future in the West, but its implementation often fails because of security requirements. In China, on the other hand, there seemed to be fewer barriers in connecting WeChat with a digital payment app like PayPal. It’s quick and easy: You just have to enter your bank details into WeChat and create a personal PIN to authorize your payments. After that, just scan a desired retailer’s QR code and the app handles the rest of the transaction — 100% digitally.

The QR interface is useful for transactions with people who aren’t in your contacts list. Sending money to WeChat friends is even easier. There is a special option for it where you find the smileys. You enter the amount you want to transfer and then authorize with your pin — that’s it.

WeChat vs. Facebook – Business Accounts
Are you an international company looking for strategies to grow your brand in China? It doesn’t take a digital marketing expert to realize the first thing you should do is create a business account on WeChat.

WeChat business accounts have proven themselves in China because of their simplicity. They are not even separate from users’ other contacts. The difference is that friend requests are always automatically accepted and there is a special tab for the company’s announcements and deals in the chat window.

These appear with the same notification as a new chat message. WeChat marketing campaigns often target user engagement and have helped companies like McDonald’s, Nike, and Louis Vuitton gain a foothold in the Chinese market.

WeChat vs. Instagram – Moments
Messaging, cashless payment, business accounts. WeChat already combines a lot of what is handled by multiple providers and social networks in this country. The only thing missing is photo uploading and an optimized news feed. Of course, WeChat hast this too. Admittedly, WeChat doesn’t have a story feature like Instagram or Snapchat for uploading and publishing quick snapshots. However, it does have a news feed for image and text content. 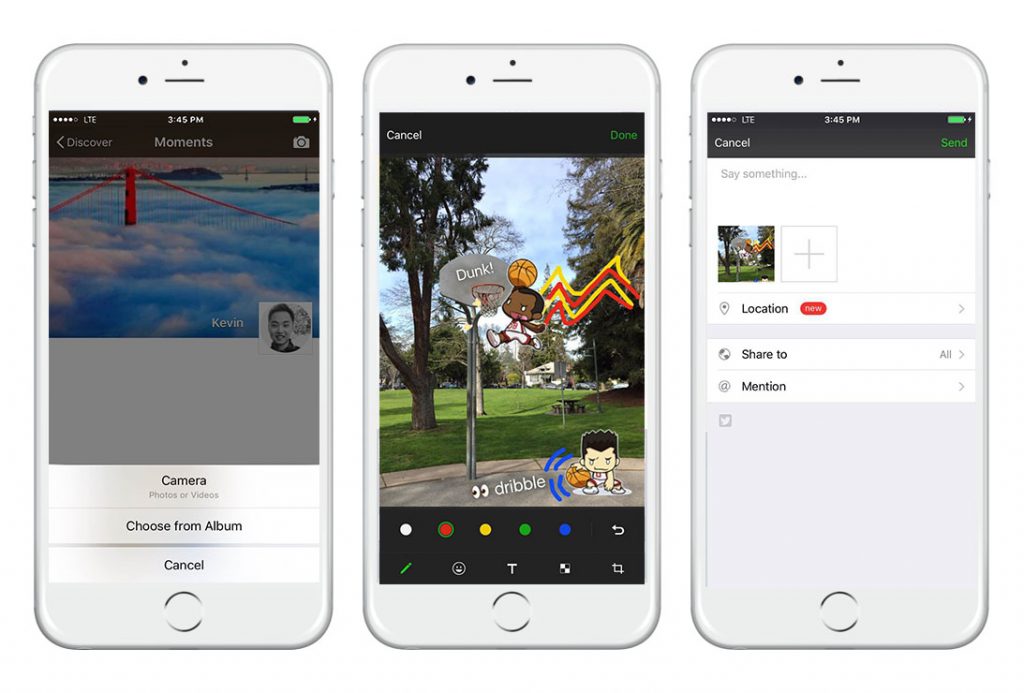 …and much more
To avoid going into too much detail, here’s a list of other current features of this all-in-one app called WeChat:

SOCIAL MEDIA MARKETING OF TOMORROW — WHAT CAN WE LEARN FROM WECHAT?

If you’re new to China, for example, as a young company looking to enter new markets in Asia, it’s not hard to get started: familiarize yourself with WeChat or find an experienced partner to work with to the best position your company on Chinese social media.

However, WeChat does have one major disadvantage. Observant readers are surely wondering when this article will discuss data privacy in China.

This should definitely not be ignored and it isn’t particularly difficult to answer either: In China, data privacy requirements are significantly less stringent than in Central Europe or North America. Additionally, Tencent, the company behind WeChat, is working together with the Chinese government. And yes, all user data can be viewed.

Even if that were not the case, the centralization of digital systems and social networks almost automatically leads to more transparent end users. If everything is managed in one app, you only have to look in one place for a collection of very detailed user data. If China weren’t so lax about data privacy, the WeChat phenomenon we know today would be inconceivable.

But it is conceivable. WeChat works great, and as a digital companion for China’s gigantic cities, it is pretty indispensable. If you’ve used the app in China, you’ll know how quickly you miss it when you leave.

Centralized apps like WeChat make life easier for individuals and business alike. Combining the level of convenience that WeChat provides with the western notion of data privacy will be one of the biggest challenges for the future of our domestic social networks.

Soon, we will see the start of the new Facebook Messenger tab, which will combine content from WhatsApp, Facebook, and Instagram from select friends. This could perhaps be interpreted as the first step toward an all-in-one super app. On the horizon, we can expect more features like Facebook payment and the introduction of Facebook’s own cryptocurrency.

An all-in-one super app like WeChat, that combines all aspects of public and private life, will remain a difficult goal to achieve in this country for the time being. In Germany, for example, the current legislation would strongly reject many of WeChat’s current features.

TikTok Marketing for e-Commerce Brands: How to Reach your Target Customers on the Rising Star of Social

Social Proof in eCommerce: Leveraging Influencer Marketing Successfully
TikTok Marketing for e-Commerce Brands: How to Reach your Target Customers on the Rising Star of Social